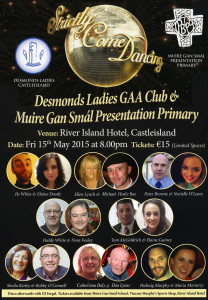 The floor is waxed, the band is booked, the glitter-ball is twirling away madly in the middle of the ceiling and all for the greatly anticipated and latter day Lanigan’s Ball.
They’ve only been at it since the end of March and now they’re facing the final frontier where fancy footwork is king and dancing queen.
Desmonds Ladies GAA Club and Muire Gan Smál Presentation Primary School have joined forces for a Strictly Come Dancing fundraiser to be played out on the ballroom floor at the River Island Hotel on this Friday night, May 15th from 8pm.
Tickets are €15 each and a limited number are available.

Competition is expected to border on the fierce as some of the contestants have taken on personal trainers and dance coaches while others have been in and out of Tralee to dance classes there. However, all will be revealed at a ballroom near you on Friday night.
They stepped out: Cllr. Danny Healy Rae, Joe Walsh and Sinéad O’Connor. These Stepped In:  Michael Healy Rae, TD, Dan Lyons and Catheriona O’Connor-Daly.
After the Ball, DJ, Fergal will take over and a disco will carry the revellers and survivors into the small hours. Tickets are available from: Muire Gan Smal and Vincent Murphy’s Sports Shop or the River Island Hotel.