Are you picky when it comes to your fruit and veg? Do you know exactly what you want? Laur does.
Afraid of pursuing it in case you fail? Laur is. Kinda.
Life is full of questions. They’re not always easy to answer. So, while you’re pondering the tough ones, you might as well accompany it with laughter!

Staged at St. John’s
Tomatoes is  short play written and performed by Eimear Sheehy will be staged at St. John’s Theatre and Arts Centre in Listowel on this Friday night, September 4th at 8pm.
It’s a case of the Tomatoes not falling far from the vine. And it certainly is in Tralee performer, Eimear Sheehy’s case – she can’t help it – it’s art and it’s bred in her from all sides.
Eimear completed a BA in Drama (Performance) at Dublin Institute of Technology in 2012. As a youth, she performed frequently in a 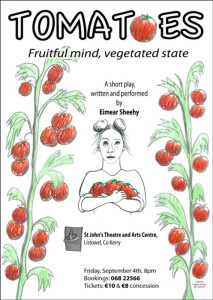 As a teenager she was a part of the cast of Peter Pan with London Based Pantoni Pantomimes during the Irish leg of their tour in 2007.
Since then she has performed with The Talisman Theatre Company, Kildare and has worked with some independent film makers including Cardel Entertainment.
Currently, Eimear is delighted to be working with Cyclone Rep Theatre Company Cork.
Eimear is a daughter of J.J. and Geraldine Sheehy and Tomatoes is her first original endeavour.  Bookings for Friday night’s performance on: 068 22 566