The sun shone for over 500 Kerry College of Further Education students on Friday evening as they graduated from a broad range of Post Leaving Certificate courses. The graduation ceremony was held at Fels Point Hotel which was significant as it was first time the event was held off campus in order to cater for the large numbers.

A huge turnout from the class of 2015 was testament to the place the college has in the hearts of those who had spent the past year and in some cases two years studying in the college.
Graduates were delighted to receive their nationally and internationally recognised Level 5 and Level 6 awards. Stories were shared throughout the evening amongst graduates of where they had found employment or where they had progressed to third level education since completing their further education awards at the college last May.

MC for the evening was Mr Joe Kelly, Head of School, who provided some inspirational words for graduates. He acknowledged the many employers in the county and beyond who had provided quality work experience which enabled students to receive certification and gain real industry experience in the skills which had been taught to students on the courses.
Cllr Terry O’Brien complemented the graduates and reminded them of the hard work they had undertaken while studying which had now resulted in such a major achievement.

Mr Brian Harkin, College Director, addressed graduates with messages of congratulations and good wishes. He thanked the staff and senior management team of the college for being the driving force behind the success of the college especially in the past few years and acknowledged the support he has been fortunate to have which enabled such positive changes to happen in recent years. 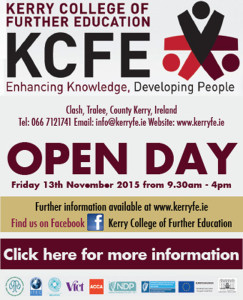 Mr Colm McEvoy acknowledged the hard work of the organising committee who had put endless hours of work into ensuring that the evening was such a special occasion for the graduates. He wished graduates well in their continuous journey of lifelong learning and also thanked the senior management team of the college for their tremendous efforts over the past few years in bringing the college to where it is today.

A special presentation was made to graduate Brendan O’Connell who won gold at the Special Olympics World Games in Los Angeles last July.
A painting commissioned by a former Art, Craft and Design student was presented to the Guest of Honour, Fiona Hartley, Executive Director of SOLAS. Fiona spoke beautifully about the value of education and the importance of always striving to reach ones potential.

As a person who had commenced as a teacher and worked her way up through each stage of educational management including being a former Principal of an FE College it was evident that she was passionate in her vocation, had an excellent appreciation of the value of the further education system and the excellent work being done by both students and teachers. She communicated her passion for learning and advancement to each of the graduates and encouraged all to go make their dreams come true.

As the college waved goodbye to the 2015 graduates they remind the public that there will be an Open Day held at the college on Friday 13th November 2015 from 9.30am-4pm for anyone who would like to explore the many course options available. Course Co-ordinators will be present on the day. Those who might be considering returning to education as mature students next September or those who might be looking at options for after their Leaving Certificate are welcome to attend as well as anyone who might like to view the recently updated facilities at the college.