On one of the first skinningly cold nights of this winter, a great crowd gathered around the warm glow of the Charity Food Fair at Crag Cave last night.
The crowd, made up mostly of women, milled around the main shopping and dining areas of the tourist attraction and sampled and supped their way through the many stalls.
The tills and their attendants were busily engaged with the crowd to the extent that €1,000 was raised and it will be divided between the Kerry Hospice Foundation and Breast Cancer Ireland.
The grounds around the centre were bathed in a festive glow from the lights pinned to the many trees along the lawns and approach avenue to the centre.
Crag Cave proprietor, Lisa Geaney said that the organisers were delighted with the turnout on the night.
“We had the grounds decorated with the lights during the week but the storms did some damage and we were just hoping for a break on the night and we got it – there wasn’t a puff and the cold didn’t matter. We’re delighted at the turn out of support,” said Lisa. 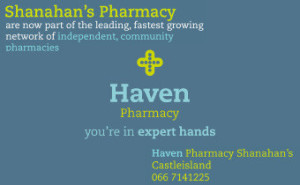 Castleisland Hospice Foundation chairman, Jack Shanahan was on hand to thank the attendance for its support and he outlined the ongoing work of the Kerry Hospice Foundation.
Crag Cave marketing manager, Jim Morris kept the gathering on its toes with a constant flow of purse opening banter. Cheeks got rosier and laughter louder as the night went on and the mulled wine began to hit the spot.
Kerry Hospice Foundation
The Kerry Hospice Foundation was established in 1990 as a voluntary organisation.  The Kerry Home Care Team was founded by the foundation in conjunction with the Southern Health Board and with some funding from the Irish Cancer Society.
The mission of the Kerry Hospice Foundation, in partnership with the HSE, is to provide palliative care and support patients who are living with an advancing illness in Kerry.
Care is provided when and where the patient needs it.  It is provided by the specialist Palliative Care team, which is based in the Palliative Care Unit, Suimhneas Centre which is attached to Kerry General Hospital. The team works in partnership with the community and hospital-based teams.  For more on Kerry Hospice Foundation you can click on the link here: http://www.kerryhospice.com
Breast Cancer Ireland
Breast Cancer Ireland is a registered charity which was established to raise significant funding to support pioneering research programmes nationally as well as to promote education and awareness on the importance of breast health amongst women of all ages.
The charity aims to transform Breast Cancer from often being a fatal disease into becoming a treatable, long term illness. Its aim is to achieve this by speeding up research discovery times in Ireland. For more on Breast Cancer Ireland you can click on the link here: http://www.breastcancerireland.com