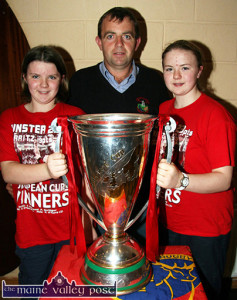 CIARA GRIFFIN
Well done to Ballymac native, Ciara Griffin who was part of the Irish Women’s Rugby Squad which took part in the recent Six Nations Championship.  Ciara played in all the games and scored a try in their final game against Scotland.

SENIORS
Following their good win over Dr. Crokes B in their first round of the Co. League our Senior team travel to Churchill next weekend for a Round 2 fixture.  Currently this game is fixed for 12noon on Sunday 3rd April, however this may change.  Please check facebook and twitter for further updates.
MINORS
Our Minor team maintained their 100% record in the Co. League with a 1-14 to 1-4 victory over John Mitchels last weekend.  They hope to maintain this record when they take on Desmonds in Ballymac on Friday next at 6.30.

FAOI 16
Ballymacelligott U 16’s played St. Pats Blennerville in Blennerville on Easter Monday evening. The underfoot conditions were very trying and it was a credit to both teams the way they adopted to play some excellent open football.
St. Pats started the game very strongly tagging on a few early scores, but Ballymacelligott gradually worked their way back into the game to lead at halftime on a score line of 2 -7  to St. Pats 0-5
The second half started in the same way with St. Pats on top but the hard work of all the Ballymac backs limited their scoring opportunities. As the half wore on Ballymac again took over and scored some excellent scores late on, to leave the final score St. Pats 1- 10 Ballymacelligott 4- 11
This was a very good team performance with 8 different scorers and all 21 players contributing to the win.
Team, Darragh Lynch, Eoin Culloty, Tadhg Brick, Kevin Lenihan, Liam O’Brien, Daire O Connor Chawke, Diarmuid Lynch,  Joshua O’Keeffe, James Carmody, Barry Lyons, David Rogers, James Carmody, Dylan McHuge, Cillian Gallagher, Daire Keane, Aidan O’Brien, Dylan Dunne Moriarty, Alusin Jah, Cian Godley, Jonathan Lowe, Brian Cassidy.

FAOI 12
Ballymac Gold & Blue Boys teams start off their League campaign with away fixtures to Dr.Crokes on Sunday 3rd of April. Both games throw in at 6pm.

FAOI 10
Ballymac U10 boys (born in 2006) are playing in a 9-a-side blitz in John Mitchel’s club next Thursday the 31st of March. The Blitz starts at 4pm. All players to arrive for 3.45pm. The Ballymac Academy continues next Sunday at 11am the 3rd of April.

FAOI 8
The Ballymac Academy continues next Sunday at 11am the 3rd of April.

FAOI 6
The U6 boys and girls will continue training in St. Brendan’s hall next Sunday the 3rd of April.

Any parent who has a boy/girl interested in joining the academy on Sunday mornings please contact Dave Slattery, Coiste na nOg Secretary on 0872201042 or the ladies Secretary Anthony Curran on 0872713507.

CAILINI FAOI 14
Our U14 girls had their first game of the year when they took on Austin Stacks in the Round 1 of the Co. League on Easter Monday last.  On the day the Tralee girls were victorious on a scoreline of 5 – 1 to 1 – 8.

CAILINI FAOI 12
Our U12 girls had a very good victory over Castleisland Desmonds last Tuesday evening in Round 2 of the North Kerry League.  They ran out winners on a scoreline of 3 – 6 to 0 – 2.
BWILDERED
Bwildered will once gain take place on Saturday 30th April 2016 at 11am.  Ballymac GAA Club and Lee Strand are once again joining forces in the promotion and running of this event.  We are also fortunate that John Lenihan and Joe O Connor of Irelands Fittest Family are designing the course for the event.  Full details on entry and all other information can be found at www.bwildered.ie and also on the dedicated facebook page.

DEFIBILATOR TRAINING
A defibilator training night will be held on Tuesday, 5th April at 7.00pm in Austin Stacks Park.  Anybody from the Club who is interested in attending please contact Club Secretary Fionnan Fitzgerald on 0879860441.

SYMPATHY
Last weekend a dark shadow was cast over the parish with the untimely death of Carol Leen, Kilquane.  Carol’s husband Noel and sons Kevin and Eoin have had a long and continuing involvement in Ballymac GAA Club, all at the Club extends its deepest sympathy to the Leen family on their sad loss.  At dheis De go raibh a anam.