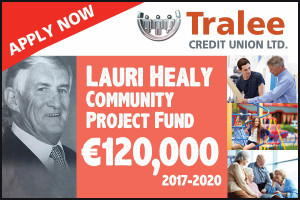 At Tralee Credit Union’s AGM in December, the board of directors announced the approval of a fund of €260,000 to be shared with the community over the next four years.

Chairman, Tom Lawlor announced the availability of the fund in addition to its normal sponsorships amounting to €25,000 and the annual education fund of €10,000.

The initiative, named as the Lauri Healy Community Project Fund, amounts to €120,000 and is in honour of its founder director, will support community based projects over the next four years.

Sean Roche, chairman of the Lauri Healy Community Project Fund Committee said that Tralee Credit Union is committed to playing its part in the community.

“The funding from Tralee Credit Union will encourage and complement the fantastic work that community groups do to make all our lives better.

“The project fund will assist in making a significant contribution to community based initiatives within our common bond throughout Tralee, Castleisland and Killorglin.

“We aim to allocate €30,000 each year, over the next four years and we are now accepting funding applications and welcome these from groups and organisations,” said Mr. Roche.

The closing date for receipt of the second round of applications this year is Saturday, September 30th.

In April of this year four community groups each received €3,000 from the first round of the Lauri Healy Community Project Fund. This groups were: Castleisland Chamber Alliance, Castleisland for the opening of a new tourist office,

Lauri Healy was one of Tralee Credit Union’s founding directors when it was set up in 1968. Lauri was a strong believer in the credit union message and ideals of people helping people which is grounded in credit union’s co-operative values.

This was at the heart of Lauri’s commitment to the movement. By working together through co-operation, people could achieve far more than they could on their own.

A board of director for over 30 years with Tralee Credit Union, Lauri served with Chapter 23 – the Kerry and Mid West Credit Unions for as many years.

He worked in support of the development of other credit unions and served as a board member of the Irish League f Credit Unions where he helped shape the movement in its early days.

These can also be collected from Credit Union offices in Tralee, Castleisland and Killorglin.

For further information you can contact Siobhan Donnelly on 066 712 2373 (ext 206) or email siobhan.donnelly@traleecu.ie

Copyright Notice: The images and text which appear on The Maine Valley Post site remain the exclusive property of John Reidy, (unless stated otherwise) and are protected under International Copyright laws. Images or text may not be reproduced, copied, transmitted or manipulated without the written permission of the author, John Reidy, in this instance. Use of any image as the basis for another photographic concept or illustration (digital, artist rendering or alike) is a violation of International Copyright laws. All images are copyrighted © by John Reidy 2017 087 23 59 467.