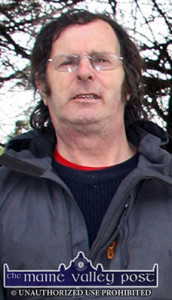 Glanageenty Walkways Committee has appointed John Houlihan as Historical and Environmental Officer of the walkways and surrounding area.

The Caherciveen native, Currow resident has hit the ground running and he has launched a search for the lesser known stories, history and heritage of the area.

He is appealing to anyone who has historical documents, photos of former residents etc knowledge of the location of forts, standing stones or sites of archaeological importance or have verbal information handed down through the generations to contact him on 086 30 58 591.

The committee intentends to erect plaques detailing all the information gathered.

John is deeply indebted to his supervisors in North East and West Kerry Development for having given him the opportunity through rural social schemes to discover this peaceful and tranquil setting.

He developed a deep appreciation of the area while working with John Lenihan and Pat O’Connell on the forest tracks which wind their way along the Glanageenty River.

Through native woodlands that abound with songbirds and where ravens, hen harriers, kestrels, pheasants and cranes can also occasionally be seen as well as wild goats, squirrrels and stoats and our more normal animal wildlife and where there are also glorious views of Carrantuohill, the Gap of Dunloe and Mount Brandon.

Always having been interested in Irish history John was fascinated to have the opportunity of working in the glen where the last Earl of Desmond was beheaded in 1583 after months of hiding in the dense woods and by the site of the Desmond Castle.

The area also played w huge role in 1916 when Robert Monteith evaded his enemies after the unsuccessful landing of arms at Banna Strand in Seán Óg’s cabin the ruins of which still remain.

← Local and National Athletics Success at Masters in Madrid
€157,047 for Road Repairs from Coolnagearagh to Breahig – Cllr. Healy Rae →