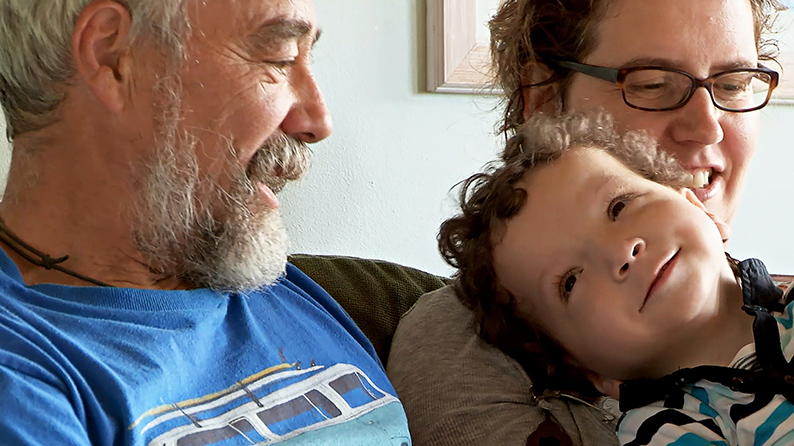 BUMBLEance, unique to Ireland – born in Kerry, is an ambulance service that has been adapted exclusively for children and there’s nothing like it anywhere else in the world!

is a one-hour documentary for TG4 can Bee seen on TG4 on Wednesday, January15th at at 9.30pm.

The programme on the uniquely Irish, Kerry born idea sets its focus on three families, each of which has been inadvertently sucked into a vortex–three amazing families unprepared for an unforeseen illness.

This tender and absorbing documentary shows the resilience of parents as they care for their critically ill children, and the viewer will see how an enlightened charity, and this inventive resource, brings convenience and joy to families.

Motivated by Care and Comfort

From its base in Tralee, BUMBLEance currently provides transportation by way of eleven vehicles. This comprises of three new ambulances which will replace a number of older models in early this year – along with the donated use of private airplanes and helicopters via BUMBLEair.

The charity’s sole motivation is to make journeys for young patients as carefree and comfortable as possible.

And although the charity receives no government funding, its service is nationwide, and its operation, too, remains free-of-charge.

The service was founded by Mary and Tony Heffernan shortly before their first child, Saoirse, died from a rare condition known as Batten Disease.

When their second child was diagnosed with the same illness, the charity’s first ‘Angel Trip’ took place in 2014.

Then, a BUMBLEance transported Liam –just five years old at the time – back home to die.

Bumbleance; Aistear Álainn, also introduces us to Susan and Paudie whose three-year-old son, JC, has a complicated condition that impairs his vision, his hearing and his ability to walk.

The family live in one of the most spectacular areas in the country, Ballinskelligs, Co. Kerry, which also happens to be one of the most remote.
Travelling to and from Dublin, to attend hospital appointments, amounts to a ten-hour trip by road. Occasionally, however, the charity offers the family a much less onerous trip.

Paudie can sometimes travel with JC by BUMBLEair, a service that drops the pair off at Kerry Airport and thereby reducing their overall journey by half.

More often than not, though, families will travel by BUMBLEance, a state-of-the-art vehicle decked out in all colours, with disco balls flashing and DVDs playing.

In addition, there is room for two companions on board, which means that both parents can travel with their child between home and hospital.

Bumbleance; Aistear Álainn is an observational documentary that shows just how challenging these everyday lives are.

We visit the school that one child attends and we discover two children are big country and western fans!

The enduring journeys these children need to make can occur sometimes several times a month and there is no vacation from the illness, therefore, and no break from the routine.

You can see the documentary by Midas Productions Tabú on TG4 on Wednesday, January15th at 9.30pm.

You can see a trailer of the documentary with a click on the link here: https://youtu.be/7pNHHhz8rHw