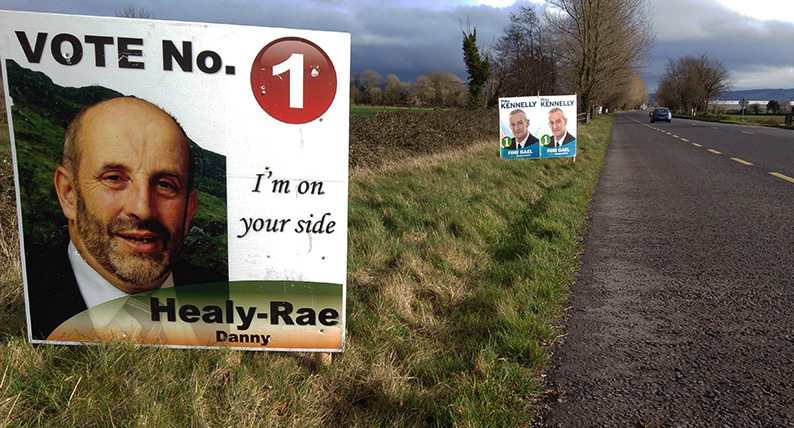 There are people who will tell you that Kerry is really just a three-seat constituency – after the Healy Rae brothers, Deputy Danny and Deputy Michael, have taken their share of the pie.

This, they will tell you, is because they are always on the ground and they’re the best in the business at getting the job done – whatever the job is.

They’re highly visible – just like the vests – and they’re rarely out of the news for too long.

When it comes to getting votes at the crucial times they’ll go to the ends of the earth – through gates, barbed wire and electric fences, ‘Bull in the Field’ signs and all.

They have a style that’s all their own and it’s all about getting in there and hurling hard, ground hurling, shoulder to shoulder and pulling – hard pulling – on everything that moves.

In the February 2016 elections here in Kerry we had the shock loss of the high profile junior minister Jimmy Deenihan which threw a pall over his party of supporters at the count in the lead up to the declaration.

Meanwhile, over the floor, the meitheal was gathering with great anticipation around the already huge Healy Rae camp.

They were waiting for the announcements which were only a matter of time away.

Michael and Danny in the Air

Michael was first in the air for his second Dáil Éireann term and Danny followed for his first as soon as Michael’s surplus was sorted. That was in the first and second counts respectively.

The sums were done and the bottom lines were predicted with the kind of precision that stands out even in the highly calculated, rarefied atmosphere of election count days.

Will it be any different this time? It’s hard to say. In reality, it’s even harder to say that there will be any more than the three seats available for the other ten candidates to fight for when the Healy Raes get up from this particular table.