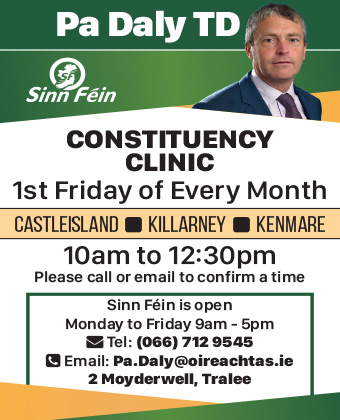 Sinn Féin TD for Kerry, Pa Daly, warns that time is running out to halt planned cuts to the Pandemic Unemployment Payment (PUP) which are due to take place on September 7th.

“There is now just less than a week left until the government’s planned PUP cuts are due to take place and these cuts will see workers’ incomes slashed by €50 per week in many cases, and by even more for others,” said Teachta Daly.

The Clock is Ticking

“The clock is ticking on this vital issue and time is running out. Thousands of workers are anxiously looking to next week and wondering how they will balance their budgets.

“Their finances will be devastated by these changes, especially younger workers whose Jobseeker’s allowance is capped at just €112.70 per week and can be even lower if they live in the family home.

“Many of these younger workers are priced out of the rental market and PUP cuts will only compound this issue.

“This should not be happening while sectors remain shut due to public health advice. These workers are unable to return to work due to no fault of their own and are being prevented by the government from returning to work.

“It should follow that the government will not punish them unfairly for this. These workers are not unemployed, they have jobs already and are not seeking work elsewhere.

“Workers in sectors which remain closed have been badly let down by this government, which has failed to properly engage with sectors and understand their needs.

“Minister Humphreys has gone into hiding in recent weeks and refused to come out publicly and explain to workers why she is insisting on ploughing ahead with these cuts despite sectors remaining closed.

“We are hearing from government that all restrictions may be lifted by late October, which would be a very welcome development and an important step towards normality if it can be delivered in a safe and manageable way in line with public health advice.

If these sectors will be able to return to work then, it should follow that the government should maintain the current rates of PUP in the time period until then.

Do the Right Thing

Slashing the PUP for the six week period in between will only cause unnecessary financial hardship and do nothing to help workers return to work.

“The government must do the right thing and treat workers fairly. These planned cuts to the PUP must not go ahead. While we are continuing to emerge from the pandemic and are hopeful for the future, the pandemic is not yet over for all sectors.

“Minister Humphreys and government must do the right thing here and stop these cuts.”