Another full house at the Church of Saints Stephen and John in Castleisland for the February 4th Padre Pio devotions. ©Photograph: John Reidy 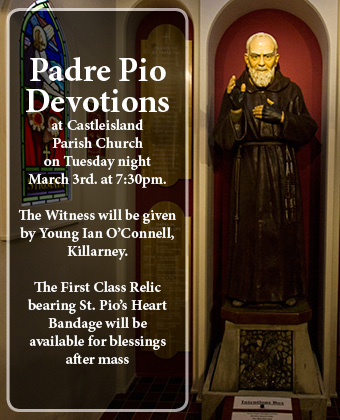 The third in the series of monthly Padre Pio Devotion and Blessing nights on the coming Tuesday night, March 3rd at 7:30pm is expected to fill the Church of Saints Stephen and John just like the previous two nights in January and February did.

The Witness on Tuesday night will be given by the inspirational  Killarney youth, Ian O’Connell on the theme ‘Hope in the Face of Personal Tragedy.’

The February 4rd devotions attracted a full house – like the January night – and people have come from all quarters of Kerry and probably beyond to be here on these two special occasions to date.

The witness on February 4th was given by Fr. Kevin McNamara, PP Moyvane and he asked the huge congregation out before him to carry the sense of community and togetherness out into our private lives rather that just simply wearing it on occasions like the one we all so engaged with on that night.

A ‘first class relic’ from Padre Pio’s heart bandage will be available for blessings after the mass.

An integral part of the ceremony of these nights is the bringing to the altar of the ‘petition box’ and the consideration and inclusion of those petitions in the celebration of the mass.

Petitions have been included from all over the county as the box is ‘left out’ by the shrine to St. Pio to the right of the main altar during the times between the devotion nights.

Fr. Mossie Brick assures those whose petitions are included in the box that they all remain private and are destroyed immediately after leaving the altar.

Stations of the Cross and Lenten Mass

In other church news: Stations of the Cross every Monday evening for Lent after the 7pm mass in Castleisland.

Lenten Mass on Thursday mornings at 7:30am for the duration of Lent.