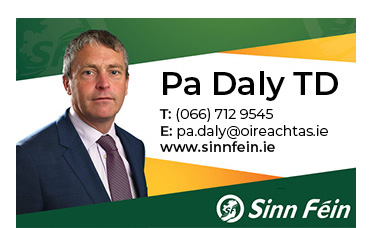 “Having reviewed what the budget is delivering, I’m confident Sinn Féin’s proposals give the people of Kerry a better chance of getting though these uncertain times,” said Teachta Daly.

“In the last couple of months, on the same day that the PUP payment was cut, the government gave a pay increase to junior ministers.

“When workers need certainty, the Wage Subsidy Scheme has not been extended past March as we propose.

“Whilst workers and families need support to during this crisis, the government have increased the minimum wage by a paltry 10c.”

“I don’t have to remind anyone of the needs of our healthcare system currently, and the government has merely repackaged the Winter Plan.

Waiting lists also urgently need to be addressed, and the government’s record of redeploying staff does not inspire confidence.

“Kerry has been devastated by the decline of tourism revenues and seasonal and casual workers most of all.

A cut and freeze in rents, when workers are giving a third of their income to housing, would have done much, but the budget contains nothing for renters. For those looking to buy, stamp duty has only been cut for developers.”

“Businesses also need support, and we’ve proposed an extension of the rates waiver into June of next year. More capital investment and a fit for purpose wage subsidy scheme would serve Kerry businesses better.”

“We needed a vision for the future and the ambition to make the changes demanded by the electorate in the last election.

“Unfortunately, this budget did not attempt this, much less achieve it,” Teachta Daly concluded.