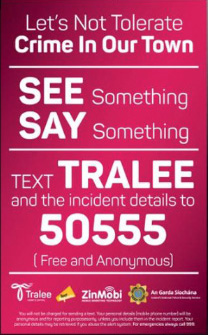 ‘See Something, Say Something’ is a project that has been working in both Tralee and Killarney in the recent past.

It has worked very well and made a strong contribution towards the reduction of crime in both urban areas.

“I have called in the past for the service to be extended to Castleisland but have been disappointed with progress on that front,” said Cllr. Fionnán Fitzgerald.

“The service would allow for immediate and direct contact with An Garda Síochána should the threat of crime visit the community.

“It is not enough that the threat of crime has to go on the Facebook page or social media outlet of a local sports club or news outlets.

“These all have a value in getting information out in case of emergency, but the response from An Garda Síochána can be all the more immediate and effective if information can be got to them quickly and directly,” Cllr. Fitzgerald continued.

“I raised the issue at a county council meeting shortly before Christmas. The reply from the chief superintendent’s office throws no light onto the future existence of ‘See Something, Say Something’ in either Tralee or Killarney nor does it promise any expansion of it to Castleisland or any other area in Kerry.

The Power of Technology

“I fully believe that technology is a powerful weapon in combating crime and it should be harnessed to the utmost to this end.

“Technology can predict and decrease the chances of crime being committed in an area and can adapt to the changing environment we live in.

“Castleisland could really benefit from having the ‘See Something, Say Something’ service in the town and locality.

“I’m very conscious of the value of warning text systems in Kerry and will continue to call for a service to be provided in Castleisland,” he concluded.

No Immunity to Crime

Castleisland is not immune to the occasional outbreak of crime on a serious scale.

But for a rapid response from the local Garda station last week here we may well have seen another.

In the absence of a Castleisland specific text line – which Cllr. Fitzgerald is calling for – a spokesman at Tralee Garda Station confirmed this morning that people in this locality who ‘See Something’ and wish to ‘Say Something’ can do so as follows: Text Tralee 50555.

Texts should provide a few words on what you’ve seen and the location in which you saw it – and the service is Free and Anonymous.